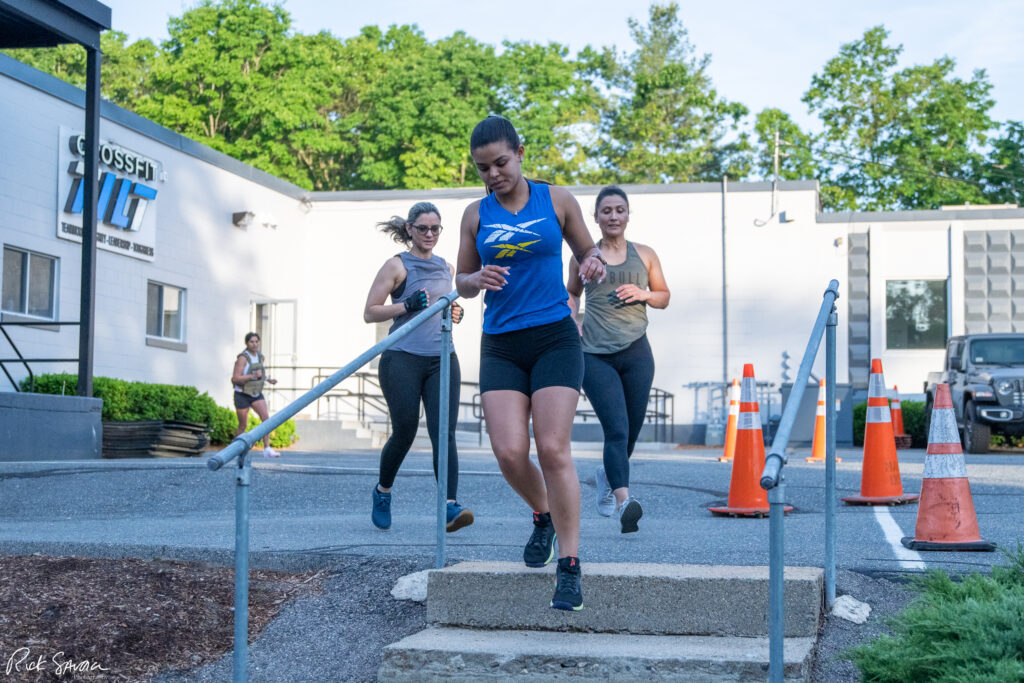 WOD Guidance:
Today we’ve combined a high skill movement in the bar muscle-up with a heavy lift in the power clean. Most classes will start with a bar muscle-up clinic, where coaches go through common scales and modifications to help you get the most out of this movement. After a power clean teaching progression, expect your coach to go through a series of practice rounds designed to get you built up to a weight that’s heavy, but an appropriate stimulus for the workout. The best context for the barbell today is to say that it is the heaviest power clean that we would consider hitting in the context of a WOD. Nobody should be cycling the barbell for multiple reps today, and even the single reps should be done at a slow pace. Those hitting bar muscle-ups will try to hold on to unbroken sets for as long as possible, starting each round with a larger set and then getting into a rhythm of 1s, 2s and 3s as they get deeper into the workout.

QOD:
Where’s the place that has the worst customer service?

WOD Guidance:
We started the week with a lengthy lift followed by a killer cardio test, and we’re ending the week the same way. Athletes vary greatly in their feelings about the overhead squat. Those with a background in sports that demand flexibility, such as gymnastics, dance, or wrestling, tend to enjoy overhead squats because the physical traits that they developed in their youth allow them to hit the positions without much difficulty. Athletes who played more traditional field sports, or who may have been sedentary for a long while before coming to CrossFit, tend to struggle with the movement and avoid them if possible. So the question becomes: why overhead squat at all if it’s so difficult for so many people? In short, the qualities that we develop when we overhead squat make us better human beings. When we overhead squat, we improve our balance, core strength, flexibility, and neurological control. Could we improve all of those things using different tools? Absolutely. Is there a more efficient tool for developing all those qualities simultaneously? I don’t think so. 2K row presents a vastly different challenge to most of our athletes. When we row a 2K, our goal should be to keep a stroke rate between 25 and 30 for most athletes. Our pace should feel fast and hard. In my opinion, the best strategy for most athletes is to row the first 500m at about an 8/10 level of intensity, and then try to get a second or two faster every 500m from that point onward. The last 500m we have nothing left to pace for, so we can turn up the intensity, find our dark place, and finish as hard as possible.

QOD:
What book have you read the most times?

WOD Guidance:
Our workout today is a really cool combination of hip extension and hip flexion. Often, we like to pick contrasting elements when we’re putting our workouts together. A great example of this is the workout “Fran” which combines a press in the thruster and a pull in the pull-up. When picking contrasting movements we’re able to create a bigger overall stimulus, because while you’re resting one system you’re working the other. In the case of “Circus Catch,” we’re stimulating the muscles of our posterior chain (hamstrings, butt, and lower back) with the dumbbell snatch, and the muscles in our anterior chain (abs, hip flexors) during the toes to bar. This creates an effect where we’re less limited by the endurance of our muscles and more limited by our body fatiguing as a whole. In CrossFit, we think of this type of set-up as “elegant” because it allows us to move quickly between movements and generally gets us fitter than hammering one muscle or movement pattern over and over.

QOD:
Who’s the greatest sports talent that didn’t pan out? 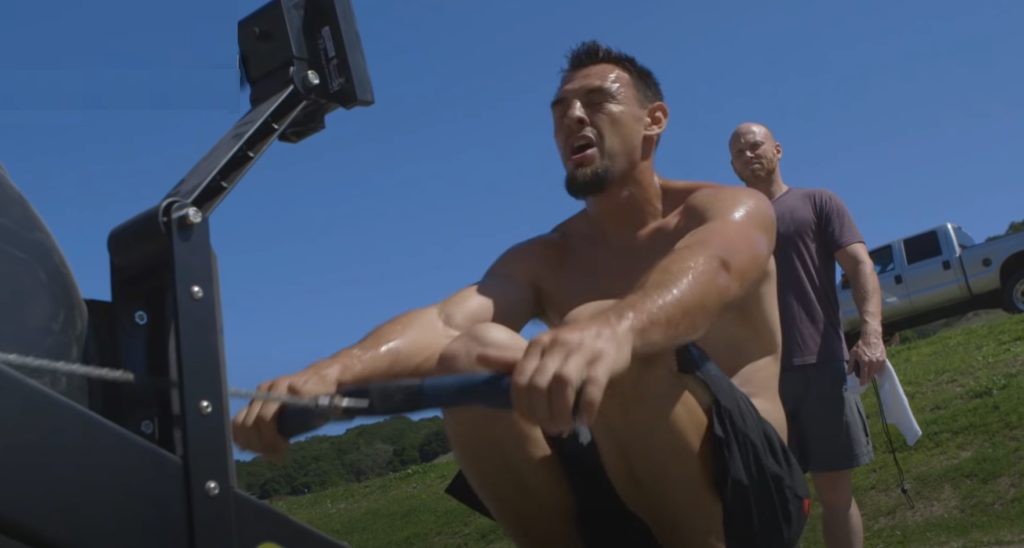 WOD Guidance:
Today we have a the second CrossFit benchmark to come out of combat sports. First, we had Fight Gone Bad, whose three 5 minute rounds were meant to simulate an MMA fight. The six 3 minute rounds of The Ghost are meant to simulate a boxing match. This workout was originally programmed with a row, so as much as possible we should shoot to make our machine a row today. With an interval like this, the one minute of rest is not enough time to fully recover. Therefore, we should try to pace ourselves out the first round and establish baselines for each of the three stations. From there, we can try to improve slightly, but those baselines should represent a contract with ourselves that we don’t violate or go underneath.

WOD Guidance:
Today we have a short workout that utilizes moderate weights. One thing that we want to understand when we modify workouts is trying to figure out what “story” the workout is trying to tell us when we look at in on the blog or the whiteboard. This is a skill that coaches have to master in order to lesson plan for their classes, but it can also be super helpful for us to master as athletes. For our “story” we want to imagine a theoretical athlete. This athlete is solidly Rx – he or she can do all the movements as prescribed, but isn’t exotic or exceptional at any one movement or in any aspect. For this workout, our first question is – how is this athlete breaking up the wall balls? Well, they’re probably not going unbroken on their sets, as being able to do 30 unbroken wall balls inside a workout is bordering on the realm of exoticism. They’re probably doing 2-3 sets of wall balls each time. So when we modify, we should pick a modification that allows us to complete our wall balls in 2-3 sets. This could be a lighter weight, or maybe going to a lower target. However, we should not pick a modification that allows us to go unbroken, as this would constitute an over-modification and essentially making the workout too easy.

QOD:
What’s something odd that you always travel with? WOD Guidance:
Today we’re going to challenge our midlines with three different movements. An L-sit is one of the most advanced movements we can master in CrossFit. If we want to modify the L-Sit we can have one or both of our feet pulled down, so that we’re supported in a tucked position rather than a straight leg position. We can also sit on the floor with our legs straight out and our hands on dumbbells, and alternate lifting legs as we support ourselves on the dumbbells. Our farmer carry/hang clean and jerk piece should take us 2-3 minutes to complete 1 round, and we should pick an L-sit modification that allows us to complete sets of at least 30 seconds at a time. Our farmer carry weight should allow us to work with only one break each round, probably at the turnaround. 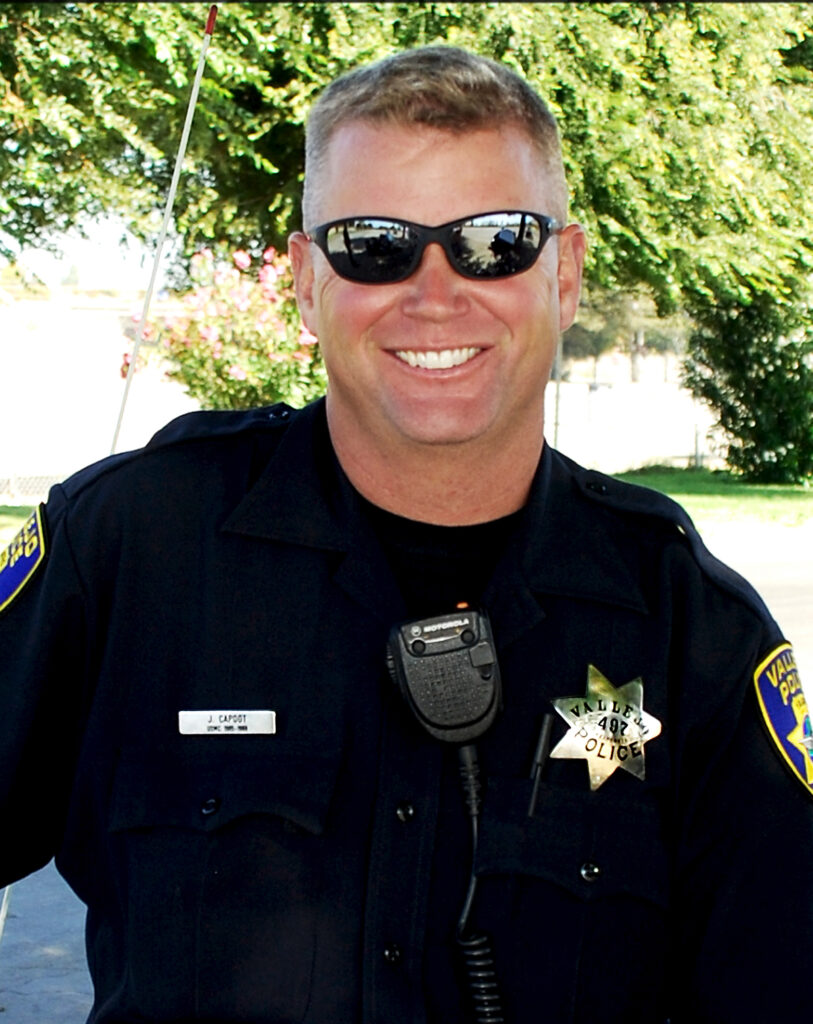 Officer James Lowell Capoot, of the Vallejo Police Department, died Nov. 17, 2011, in the line of duty while chasing after an armed man suspected of robbing a bank. The 45-year-old, who lived in Vacaville, California, joined the Vallejo Police Department in 1993 and served as a motorcycle officer, motorcycle instructor, driving instructor and SWAT officer. He received two medals of courage, including one life-saving medal, as well as many other department commendations. Capoot is survived by his wife, Jennifer; three daughters, Jillian, Jamie and Justine; mother, Beverly Sue; brother and sister-in-law, Louie and Susie DeCarlo; and several other family members. He is preceded in death by his father, Lowell Jesse Capoot.

WOD Guidance:
Following up “Tommy V” on Friday, we have a the hero WOD Capoot today. This workout is composed entirely of two movements: running and push-ups. For most of us, the way that we modify this workout will be to reduce volume on push-ups. A good reduction might be to 80-60-40-20 for each set of push-ups, or even 60-45-30-15 for athletes that need even less volume. All our usual options are available for scaling push-ups today. For those athletes that are super limited by their core strength, we can also consider doing dumbbell floor presses or bench presses. All the runs today should be done at a moderate pace, except for the last one. On that last run we can only improve our score, so it makes sense to go as hard as possible, because we have nothing left to pace for. 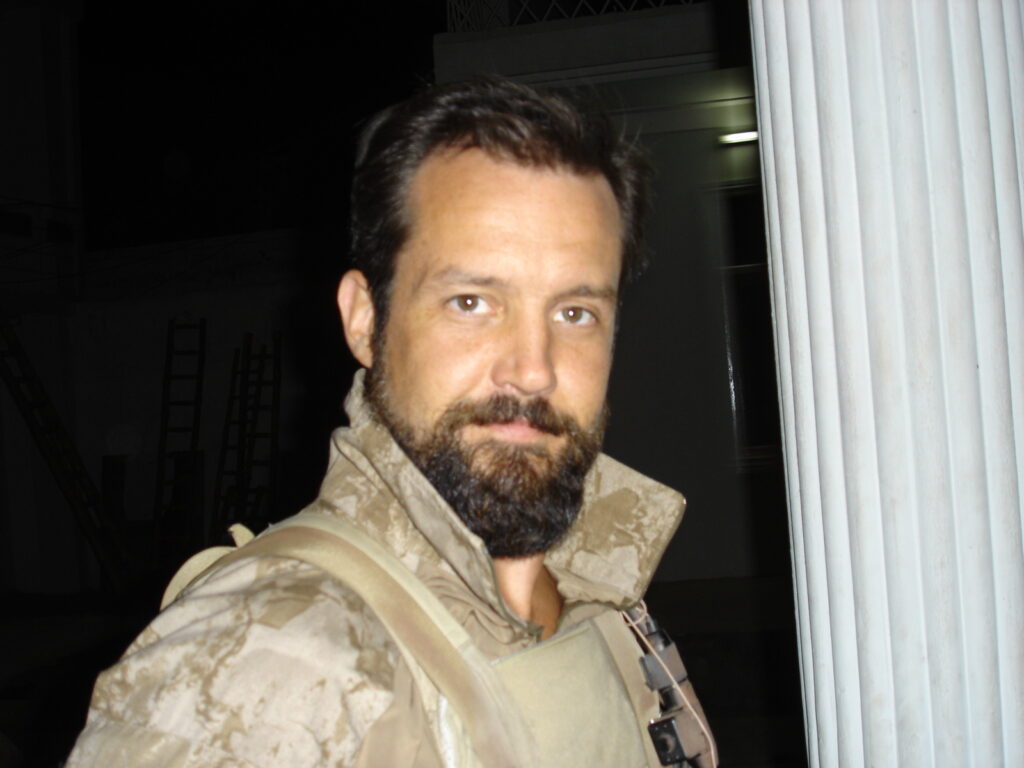 WOD Guidance:
Today we have the Hero WOD Tommy V. This workout involves a heavy thruster and a high volume of rope climbs. Whenever we’re doing rope climbs, our go-to modifications not on the rope combine an upper body pull and an abdominal flexion or crunch type movement. We see this in the 5 ring row (pull) plus 5 sit-up (crunch) modification as well as the 3 strict pull-up plus 3 hanging knee raise modification. For those athletes who plan on climbing the rope today, one of the keys to being efficient is being able to get down quickly. For those using a J-hook style of rope climb we can think about spreading the feet apart and allowing the rope to slide between them. Another option is to unhook the feet entirely and pinch the rope between our arches like a fire pole. Athletes who are very proficient at rope climbs can also attempt a heel-lock style of rope climb, which places the rope between the feet and allows us to slide straight down without recomposing our feet.

QOD:
What’s the moment of your life you wish you had on video, but don’t?

WOD Guidance:
Today we have an interesting set-up for our Thursday interval. We have super short rest intervals, but a long break after round 5. In a way, we can think of these as two separate workouts. As much as we can, our goal should be to sustain the same level of output across all 9 rounds. The reason that we love intervals is because they enhance our ability to recover in the context of other workouts. Regardless of how high our level of output in a given workout, our cardiovascular system is always working in the background. Think of the burning feeling you get in your legs during a heavy set of squats or deadlifts. Your heart and lungs are directly responsible for dissipating that feeling and allowing you to continue your set. This means that, all things being equal, having a more developed cardiovascular system will even make you stronger on workouts where weightlifting appears to be the primary feature, especially those with higher rep counts.

QOD:
What’s something you spend a small amount on that adds up to way too much over time?

WOD Guidance:
Today we have a burner of two very challenging movements! This workout highlights one of the most important aspects of a burpee; high hips. When we do burpees, we’re dropping our whole body, including our hips, down to the floor. From there, we’re raising out entire body back up to a standing position. Athletes who are less experienced at burpees tend to do this by jumping their feet narrow in between their hands and doing a squat to jump up. While this is completely legitimate, we can save energy by jumping our feet wide up from the floor outside our hands and keeping our butt up high in the air. This uses the strong muscles of our butt, hamstrings, and lower back (together referred to as the “posterior chain”) to help us rise up to a standing position. Equally as important for this workout, it saves the muscles in front of our thighs, our quadriceps, from doing excessive work, as these will already be extremely taxed from our walking lunges.

QOD:
What’s something that grosses other people out but doesn’t gross you out?